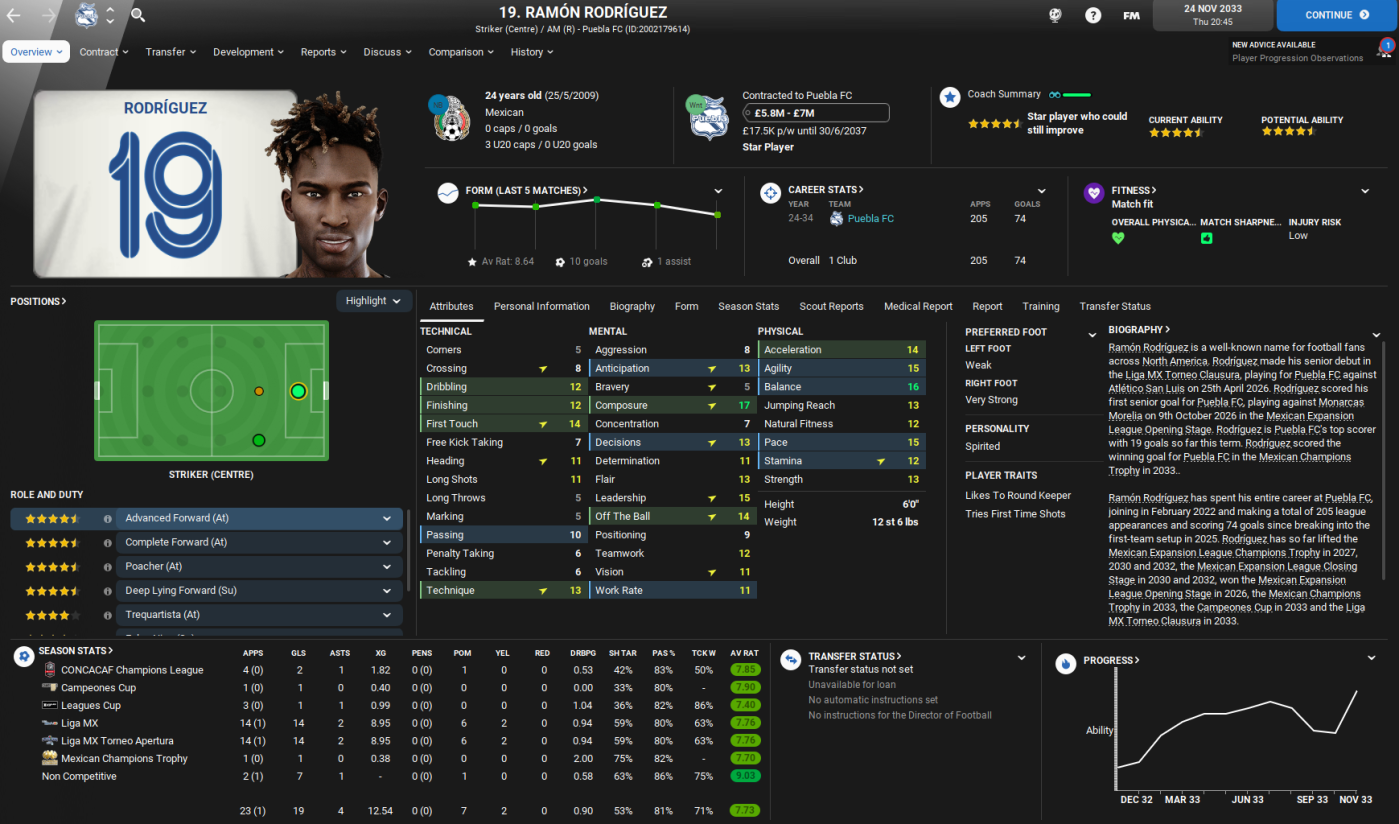 A crazy conclusion to their first season back in Liga MX had seen Puebla FC dominate the Clausura stage and lift the title in a mad final against Club América! But, unusually, Lazaró had decided to stick with the club despite becoming national champion.

Winning the Mexican title added to Lazaró’s success in lifting the top-tier titles in Chile, USA, Uruguay, Colombia and Peru, leaving only Argentina, Brazil and Canada on his list. However, he decided to stay in México for a final crack at continental competition in North America – of which there were a lot that caused havoc with their match schedule!

The form of star striker Alexander Ferrari and Ramón Rodríguez had been the catalyst for the unlikely success and both players were rewarded with bumper new contracts. He strengthened the defence with centre-back Aldair Avilés, who cost £650,000 from Monterrey, and a few squad filler signings.

Tactics-wise, Lazaró saw no need to divert from the formation that dominated the Clausura stage last season. So they’d be deploying the 4-3-1-2 tactic that looks like this:

The 2033/34 campaign began with the curtain-raising Mexican Champions Trophy, which saw Clausura winners Puebla take on Apertura winners Tigres at the Cotton Bowl in Dallas. Puebla got a flyer as Rodríguez scored after five minutes and, despite being dominated, held on for a 1-0 win with ever-improving goalkeeper Daniel Aguilar making 10 saves!

One of the many continental competitions available this season was the Leagues Cup, which began the same week as Liga MX. The Leagues Cup is comprised of Liga MX and MLS sides and is a mini knockout cup consisting of four rounds. It’s been dominated by Mexican sides, with MLS only winning it in three of the 12 seasons during this save.

The first round saw Puebla take on LAFC away, hit the bar inside 30 seconds and dominate the early stages with 12 shots in the first half-hour. But that pressure soon paid off as Ferrari grabbed the opener, before Sebastián Pérez Bouquet and Ferrari added late goals either side of a LAFC consolation. However, two days later, Ferrari suffered a fractured leg that ruled him out for three months.

Next up was another away tie at Columbus Crew. Both sides hit the woodwork in the first 20 minutes but Rodríguez made the breakthrough after half an hour as Puebla took control. However, they missed a host of chances and Columbus won a penalty that backup keeper Maurício Pérez saved. Columbus then had a man sent off and Puebla snuck a 1-0 win.

The semis saw them take on Monterrey, with Club América facing Nashville in the other, but the run ended with a narrow 2-1 defeat. And Monterrey won the final 2-1 against Club América.

The main reason for staying with Puebla was to target the CONCACAF Champions League, which begins with regional groups in North America, Central America and the Caribbean. Puebla were drawn in a group with Juárez, Canadians Cavalry FC and MLS sides Orlando City and Sporting Kansas City.

They opened up at home to SKC, who had the better of the first half but found Daniel Aguilar in inspired form. Striker Alán Ruiz made them pay with a brace, SKC fired back with three goals, but Ruiz salvaged a point with a late penalty.

Next was a trip to Calgary and a 4-0 thumping of Cavalry, which began with screamers from Ruiz and Ricardo Páez. Attacking midfielder Páez was the hero again at Orlando as he scored just before half-time then nothing happened after the break and Puebla snuck a 1-0 win to seal qualification with a game in hand. The final game saw Ferrari return at home to Juárez and they eventually made the most of their domination with a late Rodríguez strike to win the group.

That sent Puebla into the second round and knockout stages of the CONCACAF Champions League, where they’ll face off against El Salvador side Isidro Metapán.

Yet another Mexico v USA cup saw Puebla face Seattle Sounders in Campeones Cup, which sees the Mexican and American champions face off. Seattle were the home side and the 5/4 favourites but Puebla came out flying. Ruiz bagged his 10th of the season then won a penalty that right-back Gerardo González tucked home inside 11 minutes. He then laid on a third for Rodríguez just after the break and Puebla eased to a 3-0 win.

Puebla and Lazaró were officially los campeones of North America!

Despite dominating Liga MX last season, the media predicted Puebla to finish in 15th at 150/1 to defend their crown. They didn’t start particularly well, largely due to the lack of Ferrari and because Lazaro was prioritising continental competitions. They drew four of the first five games and lost the other before a Diego Arroé goal snuck a 1-0 win over Mineros de Zacatecas.

They went on to draw seven of the first 11 games, including a 1-1 at Club América, before a surprise 2-0 win over third-place Pumas. The end of the stage saw a mad 5-3 win at bottom side Atlante led by a Rodríguez four-goal haul before the striker scored twice in a 3-1 win at Mazatlán. That secured a ninth-place finish, largely thanks to the league’s top goalscorer Rodríguez, who scored 13 in 13 and had the best average rating of 7.82.

That sent Puebla into the knockout stages, unlike last year’s Apertura winners Tigres – who sacked their manager – and Club América. The preliminary round saw them take on eight-place Club Léon and a poor performance saw them lose 2-1 and exit at the first stage.

Join us next time as Robinho Lazaró takes his Puebla FC into the knockout stages of the CONCACAF Champions League and looks to repeat the heroics of last year’s Clausura stage!