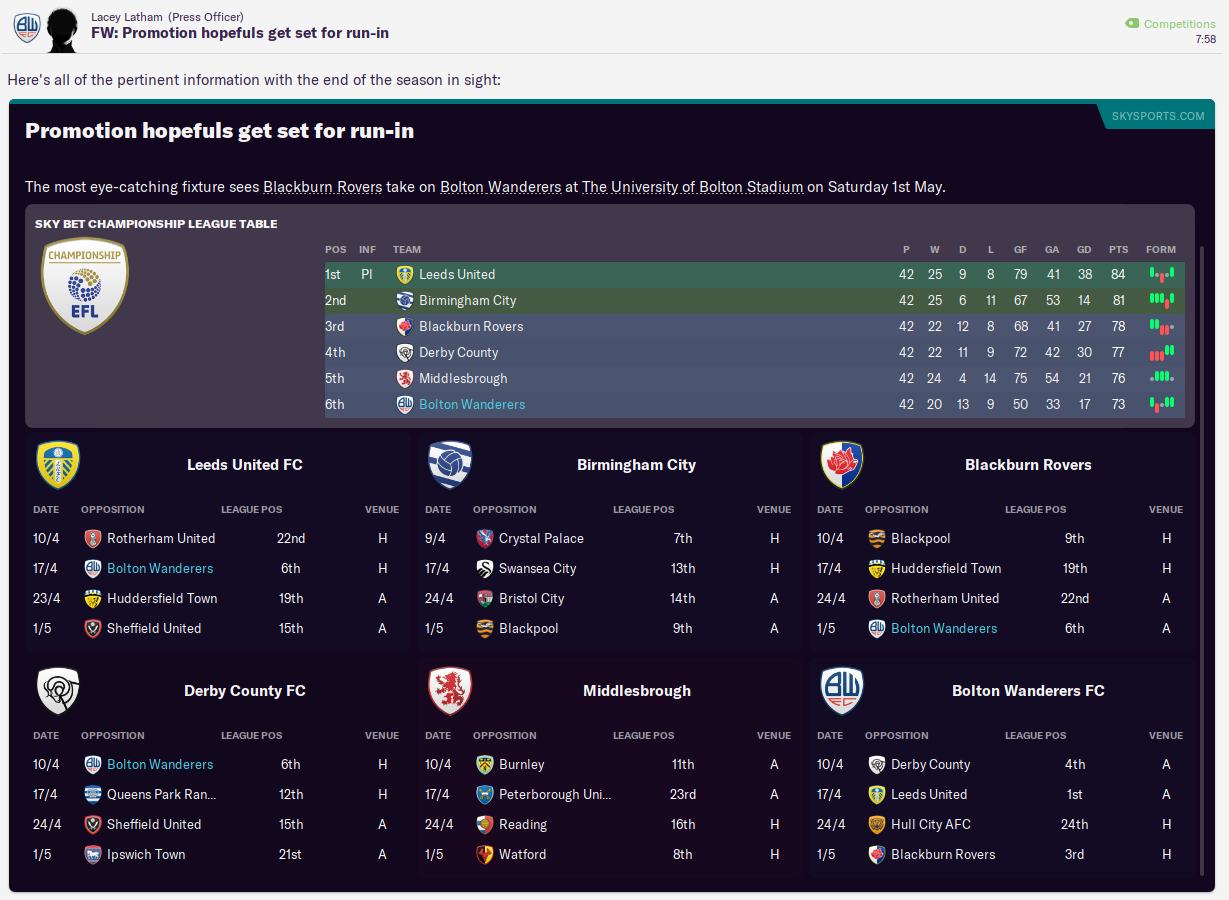 The goals of Ryan Cassidy had singlehandedly inspired Bolton Wanderers into the upper reaches of the Championship in 2026/27, along with a pretty damn solid defence. But could they maintain their strong start to the campaign and push up into the playoffs?

The striker scored his 15th league goal of the campaign in Bolton’s first game of 2027, running the entire length of the pitch to open the scoring against Charlton. He then laid on a goal for midfielder Rodrigo Aguilar to seal a 2-0 win that lifted the side back into the playoff positions.

A big local derby at Rochdale was televised and Cassidy put on a show for the camera. Rochdale had a man sent off for a shocking challenge, loanee midfielder Andres Manuel scored his first Bolton goal then Cassidy bagged a brace.

A 2-2 draw at Bristol City followed and our good form led to the Bolton board giving me a new contract worth £10,000 – which is substantially more than any of our players earn – through to 2030.

We got through the third round of the FA Cup by thumping Ipswich 5-2. And the reward for that was a massive, financially at least, draw at Man City who, surprisingly for 2027, were still managed by Pep Guardiola. We did well defensively to only lose 2-0, with City scoring with their first shot then on the verge of half-time with a goal that looked miles offside. But it did earn us over £1 million in gate receipts!

Focusing on the league

The transfer deadline day followed that and included another big money sale. 18-year-old Joseph Adams signed from Barnsley for £250,000 one year ago but struggled to get in the team and hasn’t shown much progression despite having plenty of potential. We received a £1 million bid from Bournemouth, which we eventually negotiated up to £4.5 million with £150,000 per appearance for 10 games and £750,000 after 10 games, meaning a potential £6.75 million. That would make him the third-highest sale in Bolton’s history – only behind Gary Cahill (£7 million in 2012) and Nicolas Anelka (£15 million in 2008).

We managed to bring in another loan deal with centre-back/holding midfielder Hernán Florentín coming in from Porto until the end of the season.

Loan winger, and brilliantly named, Shola Shoretire scored a lovely goal to put us ahead on 11 minutes at home to Swansea, passing to Aguilar then peeling in behind the defence for the return ball and calmly finishing. Cassidy then won a penalty that, for some bizarre reason, Ebube Onoja took and usnurprisingly missed, but we continued to play well and Luke Badley-Morgan sealed a 2-0 win on 73 minutes. That lifted us up to fifth and just five points off automatic promotion!

That gave Shoretire confidence to score a brace that doubled his season tally in a 2-1 win at home to Rotherham, in which Cassidy picked up a four-week injury in his 200th Bolton appearance. Without him, we unsurprisingly struggled to a 1-0 loss at Blackpool then 0-0 at Huddersfield, in which Shoretire and Onoja also got injured and took us to the bare bones. Mark Parish came in up top and nicked an undeserved 1-1 at Burnley, with two 17-year-olds making their debuts, then the same result against an in-form Sheffield United, who scored late on through Dominic Solanke who earns half as much as our entire squad. The beleaguered but hard-working squad went and nicked a 1-0 win at QPR with a penalty tucked home by captain Nigel Turner.

Cassidy and Shoretire returned for a home game against struggling Ipswich, in which we made a flying start with Florentín’s first for the club then Shoretire created a truly bizarre own goal that sealed a 2-0 win. But a playoff place battle at Middlesbrough ended in a 2-0 defeat that swung on a penalty for Turner cleanly tackling the ball. Ridiculous. But we recovered slightly to nick another undeserved point, with Cassidy getting his first goal since his injury, with a goal created by 18-year-old academy product Sam Weston.

The striker picked up another knock, but Parish stepped in to bag a brace that downed lowly Peterborough. And he was absent as we took on his parent club Watford but played superbly to win 3-1 with a brace from Aguilar, which also doubled his tally for the campaign, and a brilliant angled finish by Ivor Mulders.

With four games remaining, we sat sixth in the Championship on 73 points with three teams within five points of us. But we faced a tough run-in away to fourth-place Derby and leaders Leeds then at home to bottom club Hull and third-place Blackburn.

We unsurprisingly lost at Derby, but did well to get level late on through Parish only for Ricky-Jade Jones to score a winner. We then hit the post and bar inside the first 18 minutes at Leeds, who went down the other end and scored on 21 minutes and scored two more before half-time through Alexis Mac Allister and Patson Daka, who added a second before Cassidy got a consolation. That put us a point behind Palace going into the final two games.

We stopped the rot by edging a 1-0 win over relegated Hull, with Parish scoring after Cassidy and Shoretire both hit the woodwork in a goalmouth scramble. That kept us a point behind Palace and with a worse goal difference going into the final day. We were at home to promotion chasing Blackburn, who themselves were one point behind Birmingham, while Palace hosted mid-table Burnley.

We got a flyer from the kick-off as Parish flew down the right and was brought down for a penalty that Turner smashed home. Palace also led early through a penalty. We held Blackburn to one first half shot, they came back into it after the break but we held on and Badley-Morgan doubled the lead late to seal a 2-0 win. At Selhurst Park, the game went crazy as Burnley equalised with an 81st minute, took the lead on 87 minutes, then Palace equalised in injury-time but conceded a 96th-minute goal to lose 3-2.

And that meant we made the playoffs by finishing in sixth, which is Bolton’s highest league finish since 2013, with 79 points, scoring 55 and finishing with the league’s best defensive record of just 39 conceded.

The playoffs saw us take on third-place Derby against whom we’d drawn at home and lost 2-1 away in the league. The first leg at home again started well through Parish’s play, as his run setup Cassidy for his 20th goal of the campaign. But Derby soon levelled, injured Parish, then took the lead before half-time. But we responded well and Nigel Turner hit a lovely long-range strike to seal a 2-2 draw.

I setup more defensively for the return leg, in which Derby dominated the first half and Jones gave them a deserved lead. I took the brakes off around the hour mark, and 17 minutes later Cassidy got us level out of nowhere. With four minutes remaining, Shoretire sent the striker through and he converted to put us ahead. I went back on the defensive, but Cassidy wrapped things up with a hat-trick that sealed a surprise 3-1 success! But it was pretty undeserved given Derby had 24 shots to our eight.

That teed up a Championship Playoff Final rival clash with Blackburn at Wembley for the chance to reach the promised land of the Premier League. Not much happened in the first half until Mulders had a goal ruled out for offside on the verge of half-time. He then hit the bar with a long-range strike on 70 minutes but neither team could find a way through and we went to extra-time. Two minutes before the mid-way point disaster struck as Badley-Morgan turned into his own net and that was enough to seal a 1-0 defeat that handed Blackburn promotion.

Still, we gained £4.8 million just for reaching the playoff final, which is a huge amount of money for us and took the bank balance past £20 million, and we’re absolutely nowhere near ready for the Premier League yet.

It’s been another excellent season of overperformance for Bolton, having finished in the playoffs despite being tipped to just avoid relegation. Cassidy was again our star performer with 23 goals and five assists in 39 games. Parish and Mulders both scored eight, and Turner and Shoretire both scored five. Shoretire led the way with 11 assists, followed by Parish with nine and Aguilar with five. Parish got the top average rating of 7.08, followed by Cassidy (7.04) and Roco Rees (7.03).

We got another exciting youth intake with four players with 5-star potential, all of whom are immediately considered the four players with the most potential at the club. One of them, Liu Junyan, could be a superstar Chinese attacking midfielder, along with right-winger Ryan McCutcheon and midfielder Peter Agnew, who both have dual English and Scottish nationality, and Bury-born half Ghanaian right-winger Solomon Suraka. And that takes us to 16 players with at least 4.5-star potential – I can’t wait for these players to realise it!

Man Unied became the first team to defend the Premier League in this save, getting 90 points and winning the title by five points from Chelsea with Liverpool down in sixth. Norwich, Nottingham Forest and Stoke were relegated. Leeds, Birmingham and Blackburn went up, with Rotherham, Peterborough and Hull relegated.

Sunderland, Barnsley and Brentford came up from League 1, with Walsall, Forest Green, Port Vale and Salford relegated. Millwall, Cambridge, York and Oldham were promoted from League 2 with Accrington Stanley and Leyton Orient going into non-league. They were replaced by Bromley and Hartlepool, with Havant & Waterlooville, Bath, Hereford and Ebbsfleet going down. While Telford, South Shields, Worthing and Gloucester came up to the National League.

Join us next time to discover how Bolton build on their most successful season so far, with the board still only expecting the side to avoid relegation in 2027/28.