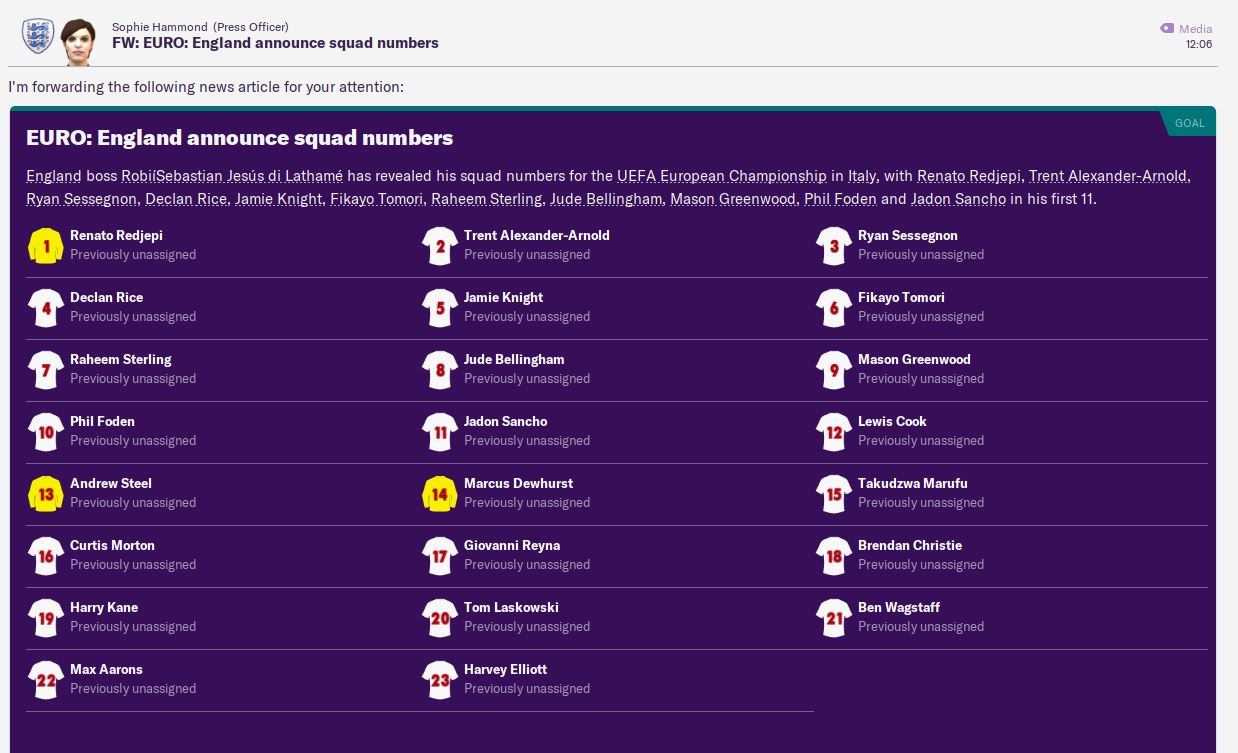 Ahead of a big summer international tournament, which is my first on Football Manager 2020, I thought it’d be a good idea to provide a brief rundown of the squad. There’ll be some familiar names and some players I’ve probably mentioned by name and you’re thinking “who’s that guy then?”

Well, now’s your time to find out, because here is the England squad for Euro 2028 that will face off against Georgia, Russia and Turkey – the 2022 World Champions – in Group D.

I think we’ve got a nice mix of youth and experience, with several key players at the peak of their powers. For ease, I’ve formatted it by squad numbers, rather than positions.

Looking at our national pool before these finals, Redjepi was strangely shown to be the best English player based on star-ratings. Whether you believe in that methodology or not, it’s therefore clear that this chap is a very good goalkeeper. He came through the Fulham academy in 2021 and he’s still at Craven Cottage.

All being well Trent will pass the 100-cap mark at Euro 2028. Now 28, he’s still with Liverpool, for whom he’s up to 357 league appearances, and he’s the captain of England going into the tournament.

Continuing the theme of attacking full-backs, Sessegnon moved to United for £75 million from Spurs at the start of this season. He’s clear first choice at left-back.

Holding midfielder Rice moved to Manchester United in 2021 for £48 million and has been an ever-present in my England reign. He also pops up with the occasional goal for us, but hasn’t scored for United in three seasons.

The City centre-back came through Fulham’s academy in 2020 and City snapped him up for £18.25 million when he was just 16. He’s formed a solid partnership with Tomori at the back.

The Chelsea centre-back bagged a hat-trick in our 17-0 thumping of Kazakhstan. He’s racked up 335 league appearances for Chelsea, but only scored 4 times for them.

The legendary winger is 5 caps short of Peter Shilton’s all-time record, so I’m slightly surprised he’s only got 31 goals. He’s been a little hit and miss in my time as England boss, due to injuries and a red card. City have trialled playing Sterling as an advanced playmaker in central midfield, which prompted me to try him there in the friendly against Serbia.

Still only 24, Bellingham has been a star player during my time with England, popping up with goals from the Mezzala role in midfield. He joined Spurs for £67 million in 2022 and is now wanted by Man United.

The striker has come into strong form in the last year or so, usurping Harry Kane as our number one choice. Still with United, he’s only scored 69 goals in 215 league games – which is remarkably poor compared to his international record.

Another player who should pass 100 caps at Euro 2028, Foden moved to PSG for £87 million in 2023 before getting a huge move to Real Madrid for £110 million in 2025. He’s scored 40 league goals in three seasons with Madrid and been a massive player for me with England.

Sancho’s cap tally is surprisingly low this far into the save, but he’s very much our first-choice left winger going into the tournament. He moved to United for £83 million in 2024.

If I’m honest, I selected him in the final squad by accident as I wanted another winger, but Cook is a very good player. But he does provide good support in midfield and the holding role. He moved to Liverpool for £75 million in 2024.

Backup to Redjepi, he’s actually just spent the season playing in The Championship but is a very good goalkeeper. He came through the Saints academy in 2021.

Dewhurst was our first-choice keeper in the early days as England boss but has dropped back to our third-choice – mainly because he’s leaked loads of goals for Swansea and I preferred him to old boy Jordan Pickford.

Marufu came through the Bristol City academy in 2021 before earning a £25 million move to West Ham in 2025. He’s the first backup centre-back.

Exciting youngster Morton came through the Fulham academy in 2023 and looks set to become a very good midfielder. He’s got an excellent free-kick on him but the lack of positional flexibility isn’t ideal.

The versatile midfielder moved to City for £82 million in 2024 and went on loan to Juventus in 2026/27. He fills in as a left winger and central midfielder and pops up with the occasional big goal.

Christie started at Forest Green Rovers in 2020 then moved to Cardiff City for £350k a year later. A £32 million move to Nottingham Forest followed in 2023 then Liverpool stumped up £42 million two years later. He’s struggled to get into my squads but has made the step up in recent months as our third-choice striker. It’s early days but he has an impressive international goalscoring record and he scored 15 in 33 league games this season.

The oldest player in the squad, Kane’s very much a player in decline but we had to bring him to the tournament for his experience and standout record. He’s also up to 234 league goals for Spurs, who’ve started deploying him as an inside forward, but he did manage 9 league goals this season.

The young defender provides solid support in defence and holding midfield. He played a 9.0 in a friendly that gave him the nod for the Euros squad. The youngster came through Arsenal’s academy in 2022 and has 77 league appearances – scoring 2 goals with a 7.04 average rating this season.

The young midfielder looks like an exciting prospect and provides decent support to the central midfield and, potentially, up front. He came through Wolves academy in 2023 and scored 5 league goals this season.

Aarons is unlucky to have had Trent ahead of him in the right-back position and, as such, only has 16 caps to his name. He moved to Liverpool for £47 million in 2021 then moved out to Spain with Atletico for £44 million in 2024. This season, he’s been very good for Atletico with 5 league goals at an average rating of 7.57.

The winger has an impressive international strike record, considering he’s yet to establish himself as a starter. He has 6 goals in 6 games in this international season. For now, Elliott is just behind Sterling as the starting right winger for now, but could easily find himself as first choice come the end of the tournament. However, his league form is less impressive with 35 goals and only 12 assists in 168 appearances.

The big-name omission was Chelsea winger Marcus Rashford, who has played relatively well in the Premier League but disappointed on numerous occasions for me.

Join us next time to see how this squad of players gets on at Euro 2028!