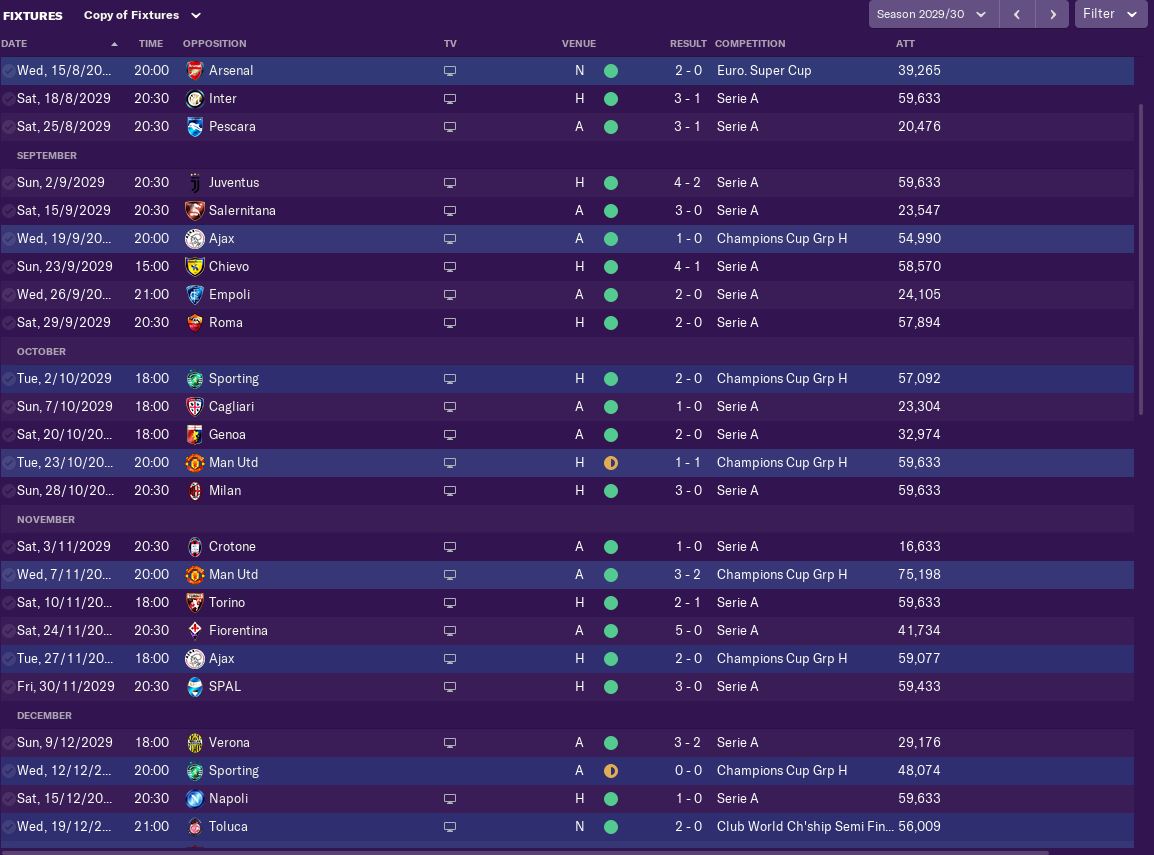 Last time out I established myself as the greatest English manager of all time by wrapping up a sixth successive Serie A title and a third Champions Cup crown for Atalanta.

And the 2029/30 campaign began in familiar fashion, with more big money sales and massive profits on players who weren’t quite establishing themselves as first-choice selections.

Firstly, fourth choice striker Mustafa Gunduz was sold to West Brom for a huge £41 million, having failed to score in 16 appearances for us in the previous season. Following him out of the door for an even bigger fee was Welsh midfielder Rob Lever, who moved to Tottenham for a massive £84 million. He’d played well the previous season, with 8 goals and 10 assists, but wasn’t going to become a first-choice midfielder, wasn’t as good as the young players coming through and he was a non-EU player, so we took the money.

Another young striker Christian Munoz was also moved on, going to Athletic Bilbao for £10 million having failed to score in 8 appearances the previous season, and a whole host of other young players were moved on.

But another major outgoing saw winger Luis Collazos move to Chelsea for £60 million. He’d scored 35 league goals over four seasons at the club, but interest from elsewhere made him unhappy and I was confident we had enough at the club to cope without him. We also cashed in on yet another backup striker, with Brazilian Dimba moving to Paris Saint-Germain for £38.5 million.

That took our summer outgoings, including loans, to 40, accruing a total of more than £270 million in transfer fees. And in their place, we spent just £14 million. That included two exciting central midfielders Lasha Macharishvili – who we’ll just call Lasha Macha – and Benjamin Majanovic.

The summer transfer dealings saw our finances in rude health, heading over the £800 million barrier for the first time.

The season again began with more silverware as we secured the European Super Cup with a 2-0 victory over Arsenal, thanks to goals from holding midfielder William Nsiala and Matteo Giacalone.

And the Serie A fixture computer threw up two massive tests early on. We began the season by welcoming Inter Milan to town, but didn’t get off to the best start as left-winger Salvatore Tozzi put them ahead inside two minutes. However, we responded superbly through our main man Cosimo Marco Da Graca as our all-time top scorer notched a hat-trick to secure a superb 3-1 victory.

Another 3-1 win followed, this time at Pescara, then we welcomed Juventus to the Ivan Ruggeri Stadium. We raced into a 2-0 lead through Giacalone and left-winger Godwin Okechuwu, they responded through Lautaro Martinez, but we restored the two-goal lead on the verge of half-time through a Da Graca penalty. They got back into it again just after half-time but captain Timmi Uldbjerg sealed the three points with 15 minutes remaining.

That good start to the season sparked a ridiculously strong run of form as we won every one of our first 17 league games until the end of 2029. And the run also saw us break the club’s record for consecutive wins.

That included a 3-0 win over AC Milan thanks to another Da Graca hat-trick and a 5-0 away thumping of Fiorentina, in which Okechukwu scored twice – prompting the below response from a fan – along with goals from fellow winger Edward Mensah, Da Graca and centre-back Jeroen Velder.

The only games we didn’t win before the end of the year were two Champions Cup clashes, a 1-1 draw at home to Manchester United then a 0-0 draw away to Sporting, when we’d already qualified so I put a second XI in.

Join us next time to see how far our winning league form can continue and whether we can defend our Champions of Europe crown for a second time.