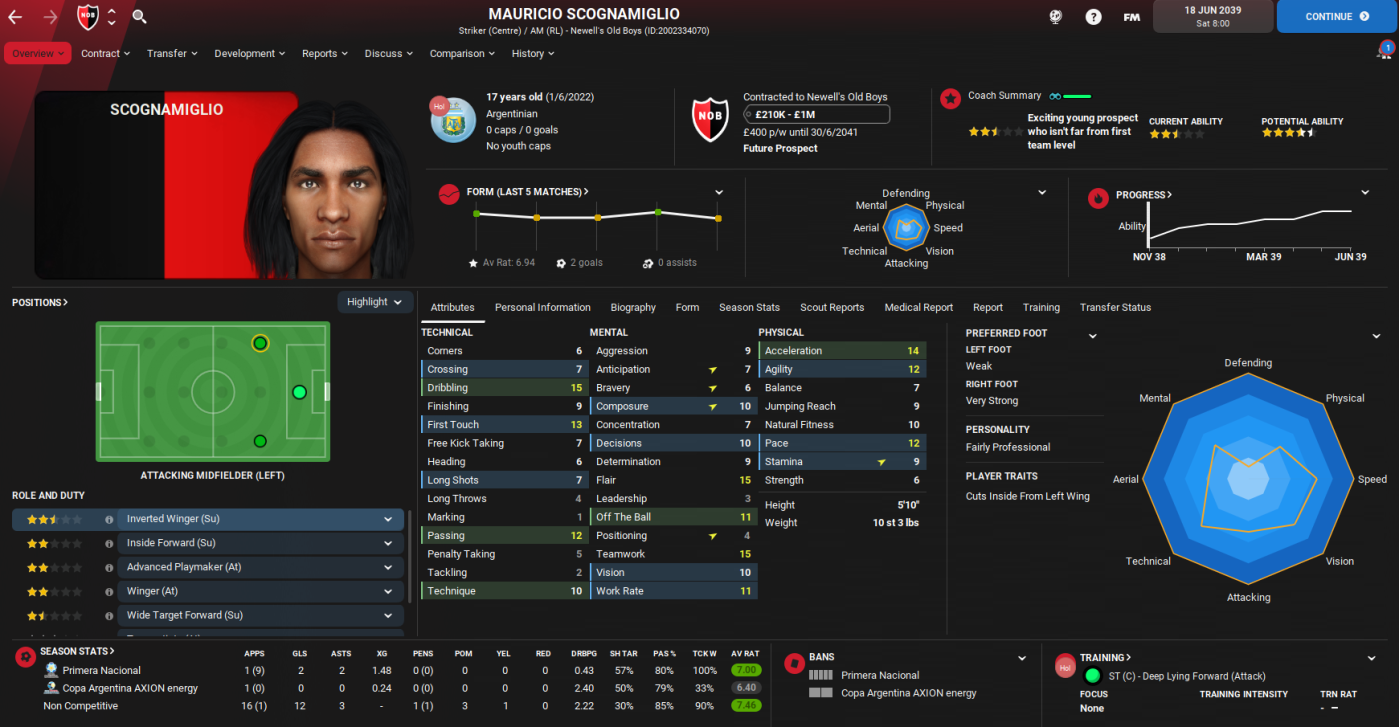 Early struggles in the 2038/39 campaign had Robinho Lazaró close to the sack approaching the halfway point of Primera Nacional. Having seen off financial ruin at Newell’s Old Boys, his next task was to lead an extremely young team into the top half of the second tier.

His side was on a run of seven games undefeated, four of which had been draws, to move into mid-table heading into a 10-week mid-season break. More positive news saw them tie down captain and best player Jhojan Arizala – who was averaging 7.25 in 13 games this season – to a new contract.

However, they lost several players on pre-contract deals and more are set to leave at the end of the season. And Lazaró was still yet to sign a single first-team player since he joined Newell’s 12 months ago!

Newell’s began 2039 with three consecutive draws, including a 2-2 with Quilmes, one of the league’s better teams. But they got back to winning ways in a 3-0 win over Atlético Tucumán led by a player of the match performance on debut from recent academy graduate centre-back Nehuén González, who became the youngest-ever Newell’s player aged 16 years and 187 days.

Their 11-game unbeaten streak ended with a deserved 2-1 defeat at Lanús but they got back on track with a 4-1 win over bottom side Nueva Chicago led by two free-kicks from midfielder Emanuel Contreras. But they then lost at leaders Old Boys, who obviously scored their first shot and nothing else happened in the match.

González became the youngest goalscorer in Newell’s history aged 16 years 222 days as he smashed home from long range in a 3-2 win over Estudiantes (BA), whose keeper dove over the top of two shots from 25 yards! Hw swiftly added a second as he was the surprise candidate to tuck home a penalty in an impressive 3-0 win at Alte. Brown, in which the other goals were scored by two more exciting talents Marco Caballero and fellow 16-year-old Mauricio Scognamiglio.

Newell’s finished the season fairly well, led largely by the standout performances of their centre-backs. Unusually, those were 16-year-old González and 19-year-old Sebastián Cozzoni, who earned player of the match four times in five games!

Also key was midfielder Contreras, who Lazaró switched to play as a central midfielder on attack towards the end of the season. And he delivered by scoring in three successive games and bagging five goals and an assist in nine games at the end of the campaign. While exciting winger Diego Cabrera remained a key player with lots of big assists, but he’s one of the players who’ll be departing in the summer and will be a big miss.

Scognamiglio made an impact with a couple of goals late in the season, including coming off the bench to bag a much-deserved 1-0 win in the final home game against Talleres. And attacking midfielder Agustín Ortz López scored his first goal for the club on the final day, when 10 men nicked a 1-0 win at Almagro to celebrate Lazaró’s 55th birthday.

Newell’s finished the campaign with three successive 1-0 wins, eight league games unbeaten and only two defeats in their final 23 games! That followed a poor spell of five defeats and one win in seven games through September and October.

That strong end to the season saw Newell’s shoot up to fifth in Group A and 10th overall in Primera Nacional. They only finished nine points off promotion despite finishing the campaign with a team of at least six players under the age of 21. Cabrera got the most assists with 13, showing exactly what the side will be missing when he departs.

The key man this season was Contreras, who finished with 14 goals, three assists and a 7.25 average rating, which earned him fans’ player of the season. Emmanuel Pedernera was the top scorer with 17 in 31 but only scored three in his last 10 games.

Cozzoni had a 7.20 average rating in 25 matches, which earned him fans’ young player of the season. Cabrera contributed a club-high 13 assists plus six goals and González got a 7.09 rating plus two goals and an assist in 11 games.

Lots of players will be leaving Newell’s at the end of the season and the club remains in financial peril, despite Lazaró’s diligent work at slashing the wage budget. But there’s so much to be excited about with the young players coming through, including the likes of González, Scognamiglio, Ramiro Roldán, Mariano Franco, Cozzoni, Ortiz López, Caballero and Edgardo D’Agostino.

And that youth potential was the key reason why Lazaró decided to accept a new two-year contract offer from the Newell’s board at the end of the 2038/39 season. Indeed, he even took a wage cut to £1,000-per-week (having been offered £1,800) to do his part to help the financial struggles. And remember, the club hasn’t signed a single player in over two years!

Lazaró’s overperformance at Newell’s didn’t go unnoticed as top-tier side Godoy Cruz made him their number one target having sacked their manager at the end of the season. Lazaró wasn’t overly convinced and continued his task of addressing Newell’s poor finances. But Godoy eventually came in with an offer he couldn’t really turn down – giving him a transfer budget 10-times greater and doubling his wage budget.

So club number 13 on this journey will see Lazaró finally take on the likes of Boca Juniors and River Plate with Godoy Cruz.

What awaits Robinho Lazaró as he joins Godoy Cruz ahead of the 2039/40 campaign? Join us next time to find out!