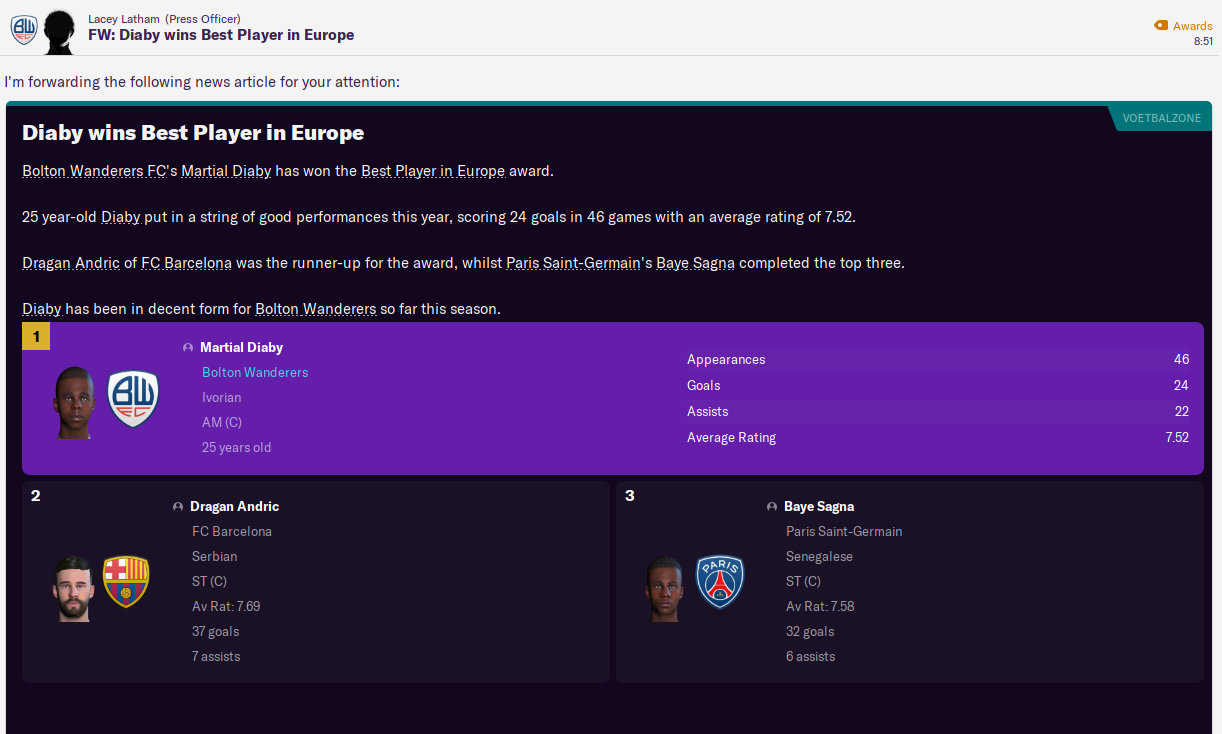 In the near 24 years this save has spanned, we’ve taken Bolton from League Two humiliation to easily the best team in England and double European champions. The dominance the club has established was starkly portrayed by our start to the 2043/44 season, which saw us win 18 and draw one of our opening 19 Premier League games.

2044 began with us completing deals for eight players we nicked from youth intakes around the world. The pick of them is Real Madrid midfielder Daniel González, who cost £2.6 million, along with RB Leipzig midfielder Niclas Wolf, who cost £1 million, and Red Star midfielder Marko Jovanovic, who cost just £800,000 but doesn’t have a work permit.

But the signing of the window was a potential superstar in 19-year-old striker Norberto Rey, who came in for just £7.5 million from Racing Club. He’s scored 35 goals in 49 games in the last two seasons, including 18 in 20 in the current campaign! With him coming in, we flogged Ibrahma Touré, now 22 and not as good, to Dortmund for £43 million.

Bolton’s title defence resumed with a trip to 16th-place Newcastle. We started brightly as Jack Bickley scored inside two minutes then did nothing for 88 minutes and won 1-0. We then went to Watford, who bizarrely had two players sent off for second yellows inside half an hour! Unsurprisingly, we hammered them and won 5-1 led by a Martial Diaby hat-trick but somehow allowed Watford to score with their only shot.

That gave us confidence heading into a home game with Crystal Palace and a Onur Kocaaslan brace inspired a 4-0 thrashing. Rey made is debut as fourth-place Chelsea then came to town and laid on a goal for Kocaaslan in a 3-1 win in which attacking midfielder José Antonio scored his first Bolton goal. And that win saw us smash the Premier League record for most successive wins with 19. Incredible stuff!

But that came to an end as our Everton hoodoo returned with a 1-0 away defeat, unsurprisingly conceding to their first shot on target and wasting a load of chances. But not to worry, as we still had a 20-point lead! Another tough away day followed as we went to second-place Arsenal, who were by far the better team but we nicked a point late on as Rey teed up Daniel to slam home his first goal for the club. We then went three games without a win as Rey’s first Bolton goal inspired a late comeback for a 2-2 draw at home to Man United.

We returned to winning ways with a 2-1 win over Villa, who again managed to score with their only shot on target. Just to give ourselves a challenge, we conceded to Leeds’ first two shots but Bickley and Kocaaslan braces inspired an amazing comeback and a 5-2 away win! However, another poor performance saw us lose 2-0 at Southampton. A good chance to put things right saw us host bottom side Burnley. And we duly delivered as Diaby created two and scored one and Germán Martínez scored just his second of the season as we put seven past former goalkeeper Tim Marshall.

Bickley got himself sent off after 17 minutes at home to Fulham, who duly went down the other end and scored. But a stray water bottle inspired a great comeback through goals from stalwart centre-back Lasse Hermansen and a Diaby winner. An injury ravaged squad then travelled to struggling Derby and had full-back Jack Barlow to thank for nicking it 1-0 with a late winner.

That sent us 16 points clear with six games remaining, ahead of hosting second-place Man City. However, City played another game three days before it and lost 1-0 at Liverpool to hand us the title without playing.

A Champions tour gave us a chance to blood some of our exciting youngsters in league games. The promising Daniel ran the show at home to City as his midfield partners Kyle Rangel, Giannis Ntelekos and Andrei Olesk scored alongside a Jesus Bonilla strike to crown an outrageous 4-1 win.

With five games remaining we had 87 points, meaning Man City’s 100 points record was potentially within reach. However, we lost at Spurs and Liverpool to ruin that pipedream, but Hermansen made his 400th Bolton league appearance in the latter. The youngsters also got mugged off in 2-1 defeats at home to West Brom and Middlesbrough. The first team returned for sharpness on the final day at Leicester, the day after my 60th birthday, and a Diaby goal nicked a 1-0 win.

That ensured we finished the season with 90 points, 10 clear of Chelsea, and scored 95 goals, which is the third-highest tally of this entire save in the Premier League. Diaby had the highest average rating in the league of 7.51 and got the third-most assists of 14 in 32 games. That resulted in him winning the English Footballer of the Year and Players’ Player of the Year while striker Myles James, who hasn’t scored in the league since Christmas, somehow won Players’ Young Player of the Year.

Another Real Madrid clash was served up in the Champions League first knockout round. The away leg was first up and Bickley and Kocaaslan strikes earned us a 2-2 draw at the Bernabéu. An absolute borefest of a return leg saw us restrict Real to three shots and earned a nervy 0-0 to edge through on away goals.

The quarter-finals saw us drawn with surprise package Kobenhavn. We went into the away leg with both centre-backs suspended and only 16 fit players, which showed in another dire 0-0. But we started the home leg much better as Rey bagged an early brace that doubled his tally for the club. Exciting American midfielder Rangel got a third before Rey wrapped up his hat-trick as we eased through to the semis.

A much tougher task awaited in the semis as we took on galacticos PSG. The home leg was up first and we got an absolute flyer as Diaby and Rey scored two in a minute inside seven minutes. Rey added his second after the break and we dealt with everything PSG add to seal a 3-0 win, in what has to be one of the best results of the entire save. Diaby scored again early on in the away leg only for PSG to score twice a minute. But we went a bit more defensive and managed to nullify them from then on. And a 4-2 aggregate win sent us back to the Final for the chance to defend our European crown!

Our youngsters got us through to the FA Cup semi-finals yet again and this time, with a fairly quiet schedule at the time, I gave the first team a chance against Arsenal. And they duly delivered as, despite going behind, a Diaby brace and goals from Rey and Daniel sent us through to the final 4-2.

Our final opponents were 2042 winners West Brom, who twice led in a poor first half. Diaby got us level and that man Kocaaslan, who’d had a stinker of a game, stepped up to nick it in the 91st-minute. But Diaby was the main man with two assists in addition to the second equaliser.

Bolton Wanderers wrapped up a league and FA Cup double!!

We were looking to wrap up a famous treble and defend our European crown as we made the short trip to the Millennium Stadium in Cardiff. Our opponents were German giants Bayern Munich, who defeated our final opponents from last year Juventus 3-1 in the semis.

We had no injury concerns going into the game, so we lined up:

We got off to an absolute flyer as Bickley sent Kocaaslan through to score against his former club after 75 seconds. The Turkish striker doubled his tally 14 minutes later after lovely play with Diaby, who curled in a corner for Preston to head home unmarked. It was 3-0 after 33 minutes and Bayern were shellshocked! But we didn’t let up after the break as Kocaaslan completed a Champions League Final hat-trick to seal a 4-0 thumping of Bayern.

Bolton Wanderers were Champions of Europe for the third time in five years and second year in a row!!

What a season as we wrapped up an amazing quintuple of Champions League, Premier League, FA Cup, European Super Cup and Charity Shield! The main man this season has undoubtedly been Diaby, who top-scored with 24 goals and got the most assists of 22 along with an average rating of 7.52 in 46 matches. On top of his domestic awards, he also won the Best Player in Europe award, which Kocaaslan won last year. He is an absolute monster of a player!

Kocaaslan got 23 goals and James got 14 in an injury-hit campaign for both strikers. Bickley, who won Champions League midfielder of the year, did well with 10 goals and 12 assists while Martínez managed to get 10 assists alongside just two goals. Our two backup left-backs were our only outfield players not to score this season!

The big highlight this season was Martin Preston and Jack Bickley becoming our second and third academy products to play for England. The excellent Preston now has 7 caps after making his debut in September, while Bickley won his first in March.

The first team still has plenty of youth academy influence with eight homegrown players and a few more coming through the ranks, despite the youth intakes drying up a little in recent years. Our Under 23s side also won the Checkatrade Trophy for only the second time in the club’s history (the first was in 1989).

We won a 9th title followed by Chelsea, Liverpool and City, who sacked Frank Lampard, while Derby, Leeds and Burnley were relegated. Norwich won the Championship and Brighton and Bournemouth were promoted with Luton, Reading and Wycombe going down.

Barnsley won League 1 with Notts County and Millwall joining them while Bradford, Mansfield, Preston and Barnet went down. Ipswich won League 2 with Gillingham, MK Dons and Scunthorpe going up and Chester and Darlington going down.

Wrexham won the Conference to get back into the league and were joined by Lincoln but Stevenage, Newport, Sutton and Exeter all dropped out. They were replaced by Cheltenham, Fylde, Dartford and Dagenham & Redbridge with St Neots, Statford, Redditch, Bradford Park Avenue, Dorchester, Frome, Dorking and Tiverton dropping out of the system.

Liverpool won the Carabao Cup, beating Spurs 3-1, and Porto won the Europa League, defeating Chelsea on penalties. Euro 2044 took place at the end of the season and four of our players were called up for England, who lost 1-0 to a not particularly good Austria in the Final.

Join us next time as we hunt down a 10th successive Premier League title for Bolton Wanderers!