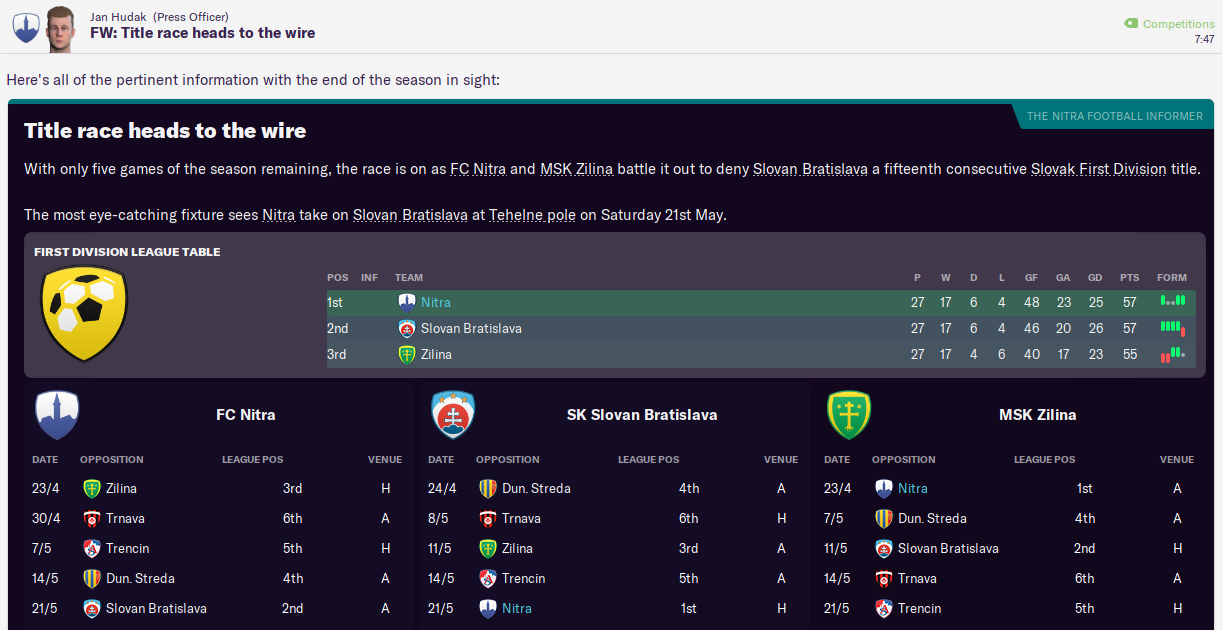 Newly promoted FC Nitra had taken the Slovakian First Division by storm in their first six months back in the league. The club sat pretty in second place and found themselves in an unlikely title battle with Slovak giants Zilina and Slovan Bratislava.

However, a key part of them reaching that position was 19-year-old homegrown winger Lukas Kalman. As soon as the transfer window opened, Benfica came in with a £2.4 million offer that the Nitra board accepted over manager Vladimir Latunov’s head, as it would have more than doubled the club record sale. But, for some unexplainable reason, Kalman rejected the move. And that wasn’t ideal as Nitra were now £260,000 in the red.

Nitra’s severe lack of finances meant Latunov was restricted to one signing in the winter transfer window, but it was a good one as he loaned in 18-year-old 6ft 5in centre-back Fernando from Botafogo.

The Slovak league was about to get a bit weird as, despite being at the winter break, Nitra only had four league games remaining. They didn’t have the easiest of returns to action as their first game back was away to perennial national champions Slovan Bratislava. That wasn’t helped by some extremely biased officiating that saw two Nitra players sent off and a penalty awarded for no reason, but they only lost 2-0 with nine men.

A hugely injury and suspension-depleted side bounced back to win 3-2 at struggling Zlate Moravce, in which 18-year-old striker Deivids Kalnins scored a brace and debutant Fernando headed home the winner in injury-time. Another crazy game saw Kalnins again on form as he scored an equaliser, teed up 17-year-old Anton Gula for a second equaliser and won a penalty for Sílvio Luís to score his first Nitra goal. but an increasingly porous defence and dodgy goalkeeper immediately conceded to draw 3-3.

The final game of the regular season finally saw Pod Zoborum host its first game in four months as Nitra hosted bottom of the league Liptovsky Mikulas. A brilliant Kalnins hat-trick, which took him to 14 league goals from nine starts, and a screamer from captain Adam Liska downed the strugglers 4-1. Slovan lost 2-0 at home to Dun. Streda (FK DAC 1904 Dunajska Streda) on the same day, which meant Nitra finished the regular season in second place and as the league’s top scorers with 43 goals in 22 games.

The league now split in half, with the top six sides taking part in a Championship Group, in which they all played each other home and away.

The group began with a difficult ask away to leaders Zilina, who’d only conceded 11 goals all season. But Nitra put in a superb performance that began with Kalnins’ 20th goal of the season. Zilina had a man sent off before Vladimir Danko came off the bench to score with his first touch and, despite a dubious late penalty, they held on for a huge 2-1 win that took them top of the league!

Another Liska screamer earned a 1-1 draw at home to Trnava before a 0-0 at Trencin and a narrow 1-0 win over Dun. Streda. That teed up a huge clash with leaders Slovan, which an early Kalnins goal was enough to nick 1-0 with the visitors offering nothing.

That huge win again sent Nitra top of the league with five games to go. They were level on points with Slovan and two clear of Zilina, with all three sides facing three away games and having to play each other.

They immediately faced another big game at home to Zilina, which teed up the best attack against the best defence. And the two countered each other out in a fairly dull 1-1 draw that Nitra probably shaded. However, on the same day, Slovan again lost to Dun. Streda!

Another draw at Trnava was followed up by beating Trencin 2-0 thanks to a Kalnins brace. A few days later, Zilina won 1-0 at home to Slovan to move level with Nitra and leave Slovan two points back with two games remaining.

The penultiamte game of the season took Nitra to Dun. Streda on Latunov’s 49th birthday. An unlikely source got them off to a flyer as right-back Renato Brtan-Cvitkovic cscored his first goal for the club with a piledriver. Right-winger Lukas Kalman’s first goal in months doubled the lead before the hosts got back into it with their first shot of the match. And, predictably, Dun. Streda equalised despite only having four shots to Nitra’s 10.

Amazingly, on the same day, Slovan lost 1-0 at Trencin and Zilina lost 2-0 at Trnava, so the day actually turned out quite well for Nitra.

That teed up a massive away game at champions Slovan knowing they needed to win or match Ziliina’s result to become champions of Slovakia for the first time. The hosts started brightly and took the lead through their strike Marcel Kovac, which had Slovan top of the league as things stoof. But Brtan-Cvitkovic somehow repeated the feat with second screamer in two games to bring Nitra level. Slovan had two goals disallowed after the break and kept pushing, and eventually nicked a 92nd-minute winner with an absolutely outrageous finish.

Latunov was devastated but Zilina lost 1-0 at home to Trencin – who’d beaten both the big two on the last two weekends. And that meant Nitra somehow won the league on goal difference – by one goal! A chaotic season finale saw Latunov lead his unlikely heroes to glory despite only winning one of their last five league games.

FC Nitra were Champions of Slovakia!!

Kalnins was very much the main man this season with a club record 24 goals in 28 appearances and just 23 starts in all competitions and a 7.42 average rating. He was broke the Slovak First Division goalscoring record with 19 goals and won the Nitra fans’ player and young player of the year. Tomas Bobcek chipped in with 11 goals and Nellinho scored 10, while Kalman scored six and Liska five. Danko, Kalman and Nellinho all got seven assists, while goalkeeper Radoslav Maly got five!

Time to move on

Despite the fun he’d had in Slovakia and the exciting young team he’d built at Nitra, with an unlikely eighth national title in the bag it was time for Vladimir Latunov to move on to pastures new again. However, the countries remaining on his list were Belarus, Bulgaria, Russia, Serbia and Slovenia, and there were no jobs available in those nations at the end of the season.

But Latunov took the bold step of resigning with the hope of sparking some activity. His number one target job became Radnicki, who were relegated from the Serbian top tier despite being projected to finish fourth! He attended an interview with the Serbian side as well as Belarussian side Isloch and both came forward with offers, giving him an intriguing choice.

But Latunov eventually decided to make Serbia the ninth nation on his Soviet Surge!