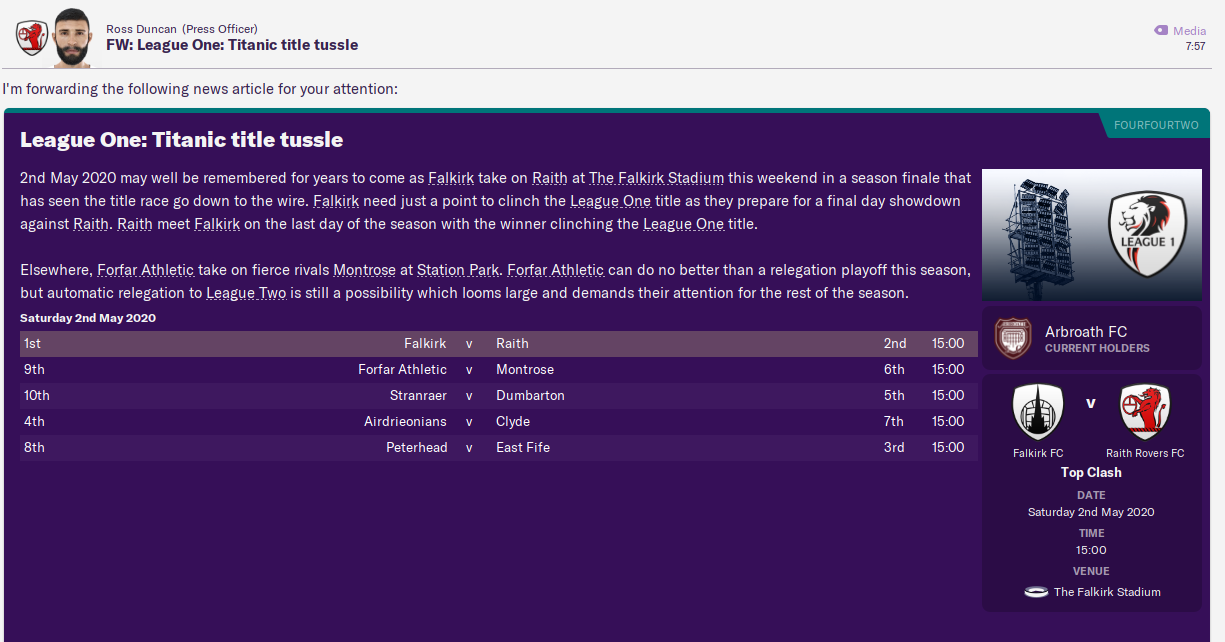 Fledgling English manager Robí di Lathamé had made a strong start to life in Fife with Raith Rovers. 15 games into the league he was still unbeaten and second only to Falkirk on goal difference in League One.

You certainly couldn’t deny that our Raith reign thus far had been highly entertaining. We’d only kept 3 clean sheets and had one 0-0 in our first 24 matches as boss.

And that trend continued in a ding-dong 3-2 win at bottom of the league Dumbarton. Veteran striker Steven MacLean gave us the lead with just his 3rd goal of the season after 5 minutes, then 3 goals in 4 minutes at the end of the half saw the sides go into the break at 2-2. But we nicked it with youngster Kieron Bowie – who’s joining Fulham at the end of the season – scoring his first goal for the club.

And another five-goal thriller followed in a top of the table clash with Falkirk. They went ahead on 18 minutes, left winger Daniel Armstrong got us level 7 minutes later, but they went ahead again with a penalty just after the hour mark. But the game hinged on their striker getting sent off 5 minutes later. MacLean got us level 4 minutes after the red card then Bowie hit a screamer to put us ahead just 3 minutes later to seal a fantastic turnaround.

And that was followed by a relatively promising first glimpse of our first youth intake at the club, which suggests a “real golden generation.” It eventually ended up providing two exciting youngsters in defensive midfielder Alan Bayliss and right-back Anthony Ross.

The free-scoring matches ended with four consecutive 1-0 league wins over Stranraer, Airdrieonians, 10-man Peterhead and Montrose. Then another followed but in the opposition’s favour as we exited the Scottish Cup at Premier League side Hibernian.

We continued our impressive league form with another clean sheet as two late goals from Lewis Vaughan and Regan Hendry earned a 2-0 win at Forfar Athletic. But we then suffered our first league defeat of the season with a 1-0 defeat at local rivals East Fife, in which we created nothing.

The goals flowed in another 3-2 success over Clyde, in which we fell behind early in the second half then raced ahead with 3 goals in 10 minutes from David McKay, MacLean and Armstrong. Then again as we raced into a 4-0 lead in the first half at Stranraer, who got one back after half-time.

That took us into a top of the table clash with Falkirk, which turned out to be a dull affair that ended 0-0. That point earned us and Falkirk a playoff spot in March with 9 games remaining, while we were 2 points clear in the race for the title and sole automatic promotion place.

We snuck a 1-0 win over Airdrieonians then slipped to two draws with Forfar and Peterhead. But out chances were dealt a huge blow as Lewis Vaughan suffered a damaged cruciate ligament that ruled him out for a massive 11 to 13 months.

But the boys rallied with a 3-1 win at Montrose in which centre-back McKay bagged two goals that took him to 10 for the season and made him our joint-top scorer. That result meant we’d still only lost 1 match all season but left us 2 points behind Falkirk with 5 games remaining. While McKay won both the March player and young player of the month awards.

We slipped to our second defeat of the season 1-0 at Clyde, no thanks to another defensive injury crisis then left-back Gregor Donald getting sent off on his debut! Falkirk drew 0-0 on the same day, which took their lead to 3 points.

And we fell behind again as local rivals East Fife came to town, but this time we bounced back with another McKay goal. Two substitutions then made all the difference as I switched both wingers and replacements Armstrong Oko-Flex and Simon Brady both scored before striker John Baird ended an 11 hour goal drought. But midfielder Hendry was the star of the show with 2 assists and 6 key passes.

We then went to 6th-placed Dumbarton, who were 5/4 favourites for the game. We again went behind early on to a goal from Anton Ferdinand but drew level as Baird scored 2 in 2. MacLean struck after the break only for Joe McKee to score a penalty to get them level. But supersub Oxo-Flex, carrying a knock, did it again then Baird made sure of the result late on. And that ensured we set Raith’s all-time record points total of 78.

Baird kept his hot streak going by scoring a first half hat-trick at home to Stranraer, then Oxo-Flex, starting this time, also scored for the third game in a row to seal a 4-1 win. Falkirk drew 1-1 at Clyde, which sent us into the final day one point behind them.

Someone in the Scottish League clearly had a love for final day drama as the last game of the season was a title showdown with us making the trip to leaders Falkirk in what the media termed a “Titanic title tussle.”

The match looked to be dragging towards a 0-0 that would see Falkirk seal the title but it turned, again, on key substitutes. I brought on young winger Brady and striker Darren Shaw on 79 minutes. And 8 minutes later, Brady knocked a nice cross into the box that MacLean converted at the near post. That looked to have won it but then 2 minutes later, Brady played a delicious through-ball for Shaw to race onto and slam home his first senior goal. And what a time to score it!

This huge final day win ensured Raith Rovers were the Champions of Scottish League One for the third time in their history!

The league title came as a result of winning our final four games of the season and scoring 14 in those games. We finished the season with just 2 defeats, 9 draws and 25 wins and with the joint-best attack of 70 goals.

Join us next time as we look back on a highly successful first season in Fife that saw us lead Raith to promotion!