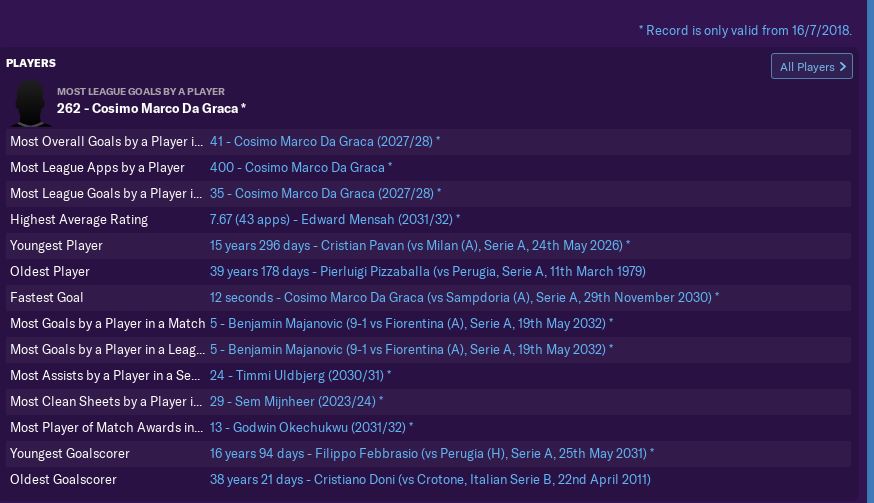 Atalanta’s hunt for La Decima – a 10th consecutive Serie A title – began with upheaval at the club, as our long-time Chairman Antonio Percassi moved aside with a new tycoon Ty Jenkins completing a takeover.

In effect, it didn’t actually change anything as the new guy didn’t put any money in and didn’t take any money out.

The summer of 2033 saw another host of outgoings, as we sold off youngsters that didn’t look like cementing first-team places.

First, the biggest sale of the summer saw winger Lahcen Abdellaoui moved to Manchester United for a decent £37.5 million. We also moved on midfielder Hallvard Steinkjer and Jeroen Velder, who’d both irritated me in a defeat at AC Milan and had stagnated during the previous season for £18.5 million and £31.5 million respectively.

Mexican winger Hector Barroso and Brazilian Claudinio Geraldo, neither of whom managed a league game for the club, were moved on for princely fees of £15.25 and £11.5 million – taking the summer earnings to around £100 million.

There were no particularly exciting incomings, but young centre-back Rostislav Hubnik does have plenty of potential considering he cost just £1.5 million from Slavia Prague, as does Angel Saiz who cost an initial £4.5 million from Real Madrid.

We went into the new season with a particularly youthful looking squad – even for us – with at least half the first-team squad under the age of 21, including ten teenagers. Only five players are more than 24, club stalwarts Timmi Uldbjerg, Alberto Pfandler, Matteo Giacalone, vice-captain Antonio Carlos and the only 30+ player Cosimo Marco Da Graca.

Our ninth title defence got off to a great start as we won the first four games of the season. A Godwin Okechukwu brace kicked us off with a 3-1 win at Pescara then goals from Giacalone, Edward Mensah and Bjorn Amler sealed the same scoreline at home to Cremonese. Then a Giacalone brace helped us to a 4-2 win at Salernitana.

But the most important win was a 2-1 victory at home to Inter Milan, which was sealed through two first-half goals from Da Graca and Okechukwu.

We then went to Cagliari and just about salvaged a draw thanks to an 89th-minute goal from substitute striker Kai Nennhuber. But that proved to be the last league game we’d fail to win for a while, going on a streak of 10 consecutive league wins that ended with a 1-1 draw at AS Roma.

Three more wins, including a 2-0 win at Juventus thanks to Da Graca – again against Juventus – and Okechukwu, saw us through to the end of 2033 still unbeaten in the league.

These games saw Da Graca further cement his status as an Atalanta legend, as he surpassed Cristiano Doni’s all-time league appearances record and become the first Atalanta player to reach 400 league games, in addition to being the club’s record all-time goalscorer.

Our Champions Cup form, however, was not so great, as we were drawn alongside Atletico Madrid, Olympique Marseille again and Basaksehir.

We opened up with an unlucky defeat at Atletico, who scored a last-minute winner through our former defender Mariano Dammacco – a classic FM screwover – then got back to winning ways with a 3-0 defeat of Basaksehir thanks to a Giacalone brace.

A second defeat of the campaign followed in Marseille, against whom we also failed to win at home as we drew 1-1. And, despite beating Atletico 4-3 thanks to Benjamin Majanovic’s injury-time winner, we were demoted to the Europa Cup before the final group game in Basaksehir – in which I put out a reserve side and we drew 0-0.

Join us next time as the Atalanta boys go in search of a tenth straight Serie A title, looking for a first-ever undefeated season, and return to the Europa Cup for the first time in several years.