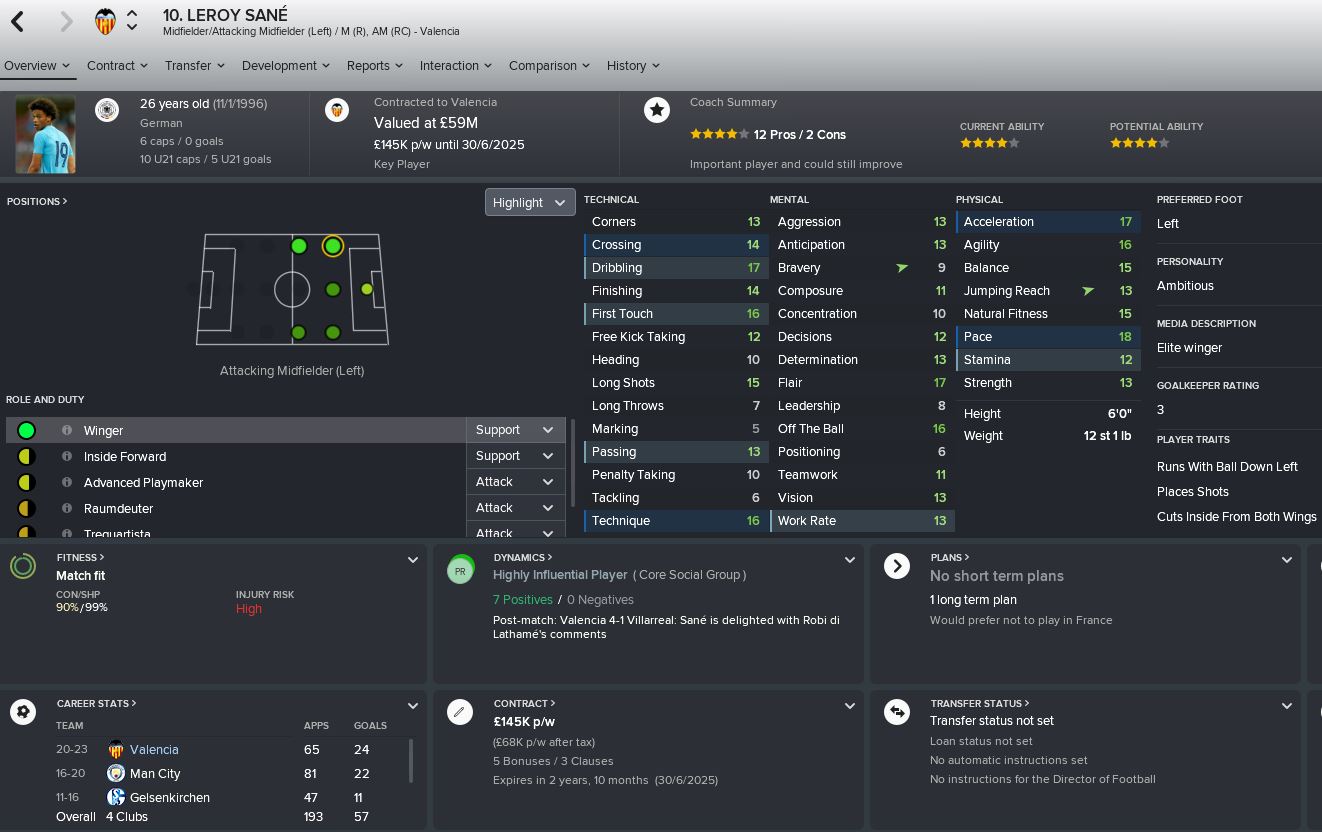 It seems rather odd to step into a Football Manager Story some 5 seasons into a reign, but it seemed appropriate to kick off the brand new Football Manager Addict blog with what is one of my favourite FM saves in a while.

Down the years Football Manager has been responsible for me forming totally irrational loves for all manner of random clubs. From my grass roots to world’s greatest club rise to fame with Boreham Wood to domestic domination with Hoffenheim and Sporting Lisbon, there’s many a random club whose scores I now look out for every weekend – and have a shirt or team jacket hanging in my wardrobe.

But one club stands out among all others throughout my time playing FM. Valencia. I’ve done a stadium tour of La Mestalla, I’ve got a Valencia kit, I love watching them play – even during the dire Gary Neville days – and now my latest save on FM18 has been one of my most enjoyable. Because I’ve just led Valencia to the title in the fifth season.

Expectations weren’t too high coming into the 2017/18 season at La Mestalla. If memory serves me right the board were hoping for mid-table mediocrity, but we well surpassed their expectations and managed to secure Champions League with a fourth placed finish.

Barcelona, Real Madrid and Atletico Madrid proved tough nuts to crack for several seasons, and Athletic Bilbao joined the party in the second campaign and pushed us back down to fifth place. We then moved up to third in the third season, despite racking up four points less than the previous campaign (62 points in third compared to 66 in fifth place). And in the fourth campaign we improved markedly to a 74 point finish, but somehow slipped down a place to fourth.

I pride myself on investing in youth on all my FM saves. I start to get twitchy when a player hits 26 and I love seeing my focus on youth reaping the success. That’s exactly what’s happened in the fifth season with Valencia.

We won the title with four games remaining then switched off and eventually won it by three points from Real Madrid, finishing the campaign on 83 points. However, our attacking style showed as we racked up 103 league goals.

My squad featured only four players aged over their mid-20s: 25-year-old captain and all-round hero Carlos Soler, 30-year-old defensive leader Jeison Murillo and 33-year-old serial yellow card collector Dani Parejo, alongside the superb 26-year-old Leroy Sané. The latter broke his own club record for most assists in a season and broke the club’s highest average rating record on his way to winning the Spanish First Division Player of the Year – racking up 16 goals and 20 assists in all competitions. He’s now the only current player to have earned the right of ‘club legend.’ 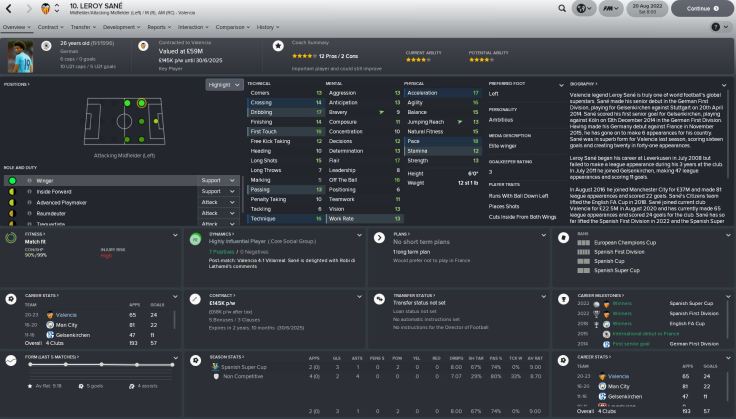 Other top performers were my two wonderkid regen Spanish strikers, Valencia youth product Juan Carlos Marenyá and David Carrasco, who we signed from Deportivo La Coruna for just £8.75 million at the start of the season. Marenyá racked up 29 goals in all competitions, of which 24 were in the league, as well 17 assists, while Carrasco had a goal blitz late on in the season to drive him to 32 goals in 42 appearances in all competitions, and 26 in 34 in the league.

The other wide support – in a 4-4-2 attacking formation – came largely from Paulinho on the right. The Brazilian is probably my favourite youngster to sign on the game, but his 8 goals and 6 assists didn’t quite live up to the previous season’s 17 goals and 7 assists, which admittedly came with him playing up front.

I have another attacking talent in waiting in Argentinian starlet Mariano Rizzo, who my coaches reckon is better than all the other youngsters but I struggle to fit him into the side. Nonetheless, he managed to claim 10 goals and 6 assists.

And in midfield our options are plentiful. Soler and Parejo were very much first choice in the title winning campaign but, with Parejo ageing somewhat, I’ve unearthed another talent and another Argentinian in Joel D’Alessandro. He will be starting alongside Soler and I think he should become world class. 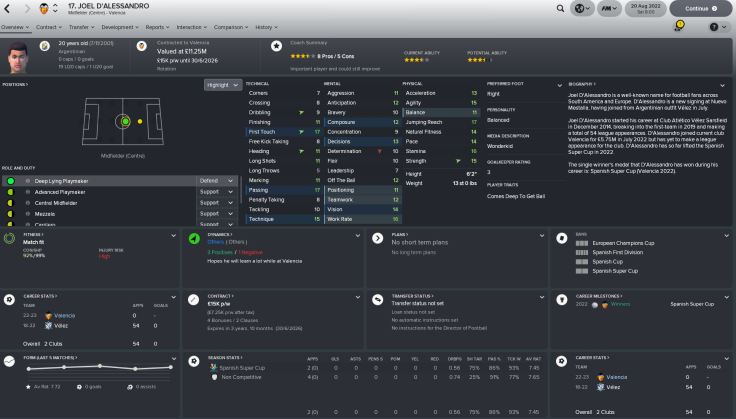 The defence is worryingly youthful and that probably showed with the 47 goals we leaked en route to the title. Alex Centelles was impressive at times, but I allowed him to move on to Bayern for £20 million as 21-year-old Tomas Kohout took his place having filled in at centre-back for a season. He moved out to the left as I finally brought in an actual centre-half to accompany Murillo in exciting 18-year-old Julien Guillou. Yep, an 18-year-old first choice centre-back! 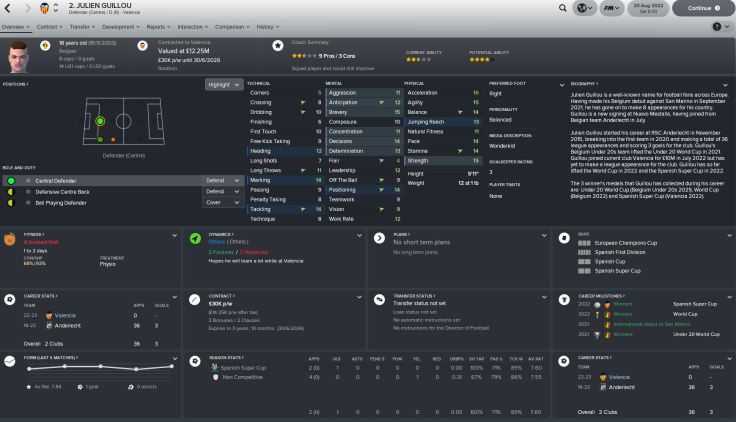 They’re supported by yet another weekend in Colombian goalkeeper Leonardo Hinestroza, who signed for £875k in the previous summer then suddenly became our number one as Neto decided he wanted a new challenge. But Hinestroza more than lived up to expectations, keeping 12 clean sheets in 36 league games.

So there’s a brief introduction to the team and the background to the Vamos Valencia save. We’ll bring you more as the game continues, as well as taking a closer look at some of the exciting youth prospects coming up through the Valencia ranks.

I hope you’ll enjoy hearing how we get on, and would love to hear your thoughts on any potential content.

One thought on “Vamos Valencia: Part 1”