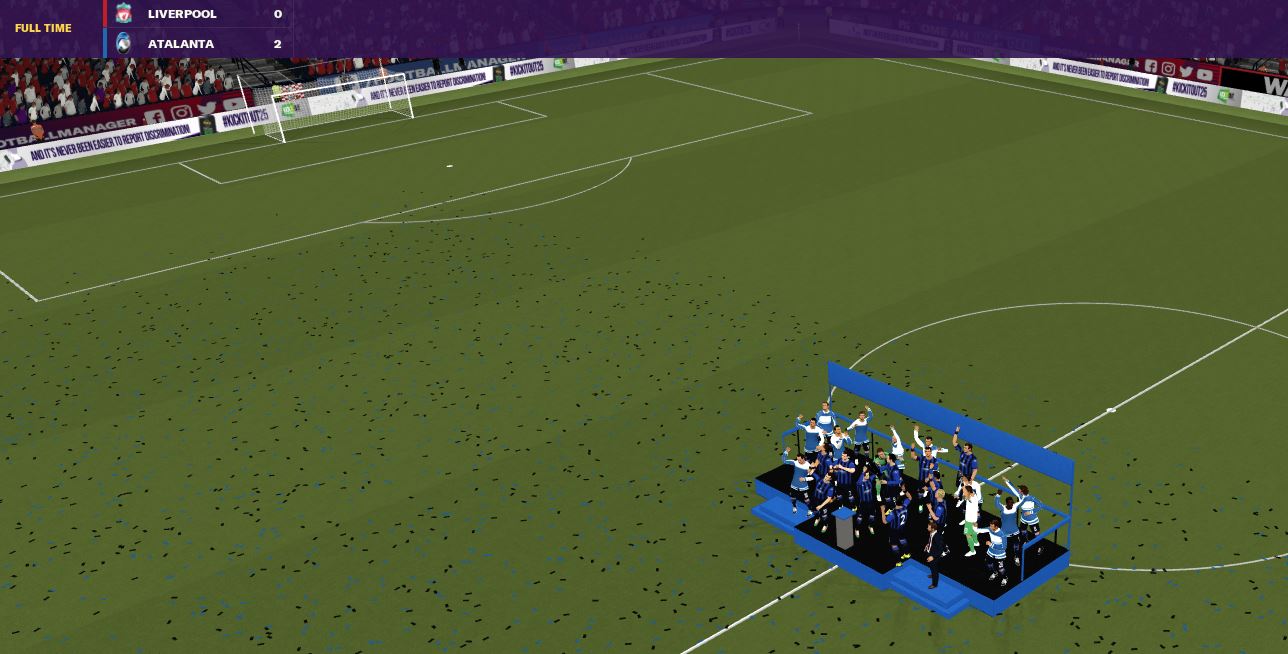 We began the defence of Atalanta’s first ever Serie A title strongly, heading into 2025 in a fine vein of form with seven straight victories. But things were about to get a whole lot better for my talented group of youngsters.

The year began with silverware, as we defeated Inter Milan 3-1 in the Italian Super Cup – played in Dubai – thanks to box-to-box midfielder Diego Roncaglio’s brace and a third from Cosimo Marco Da Graca.

That set the scene for a frankly ridiculous run of league form, which stretched our winning streak from before the New Year to 21 matches.

This included a vital 1-0 win at Inter in late January, thanks to a goal from Antonio Marin, then a 2-1 home win over Juventus, thanks to goals from Da Graca and Marin, a 3-0 win at Napoli, with Roncaglio, Marin and Da Graca all on the scoresheet, and an important 1-0 win at AS Roma in April, which was secured with a penalty from captain Filippo Melegoni in the fifth minute of injury-time.

That form meant the league was very much ours for the second season in a row, sealing the title with a 6-0 win at home to Crotone. But the manner in which we did was exceedingly dominant. We racked up a record 104 points, scored 90 goals and only conceded 16, and won a record 34 matches, only losing twice.

Our big priority for this season was to improve our form in the Champions Cup, which was looking extremely difficult as we were drawn against Real Madrid in the first knockout round. A 3-1 defeat in the away leg confirmed the huge task we were facing, but then goals from Roncaglio and Marin sealed a 2-0 home win to confirm progression to the quarter-finals.

Things didn’t get much easier as Chelsea was our reward in the next round. We conceded after 14 minutes in the home leg but fired back to win 3-2. And that was followed up by one of our best performances ever as we defeated Chelsea 2-0 at Stamford Bridge thanks to an Alessandro Zanelli double.

Italian teams dominated the semi-final line-up, as we were drawn with Roma and Napoli – who were our closest rivals in the league at that point – were up against Liverpool. We went to Stadio Olimpico in the first leg and held firm to secure a 0-0 draw, then got off to a good start in the second leg with an early goal from Alessandro Cortinovis.

It was another tight affair up until Da Graca doubled our lead on 75 minutes, only for Roma to get back into it a minute later. I was suddenly nervous, only for Da Graca to double his tally another minute later. That great performance sealed a 3-1 win, which meant Atalanta were in the Champions Cup Final for the first time in their history!

The Final saw us take on Liverpool, who were looking to win the trophy for the second consecutive time. The first half was rather a cagey affair until Zanelli put us ahead three minutes before the break. And it remained that way until deep into the second half, before Roncaglio doubled the lead and confirmed victory in the 80th minute. It was confirmed – Atalanta were Champions of Europe!! 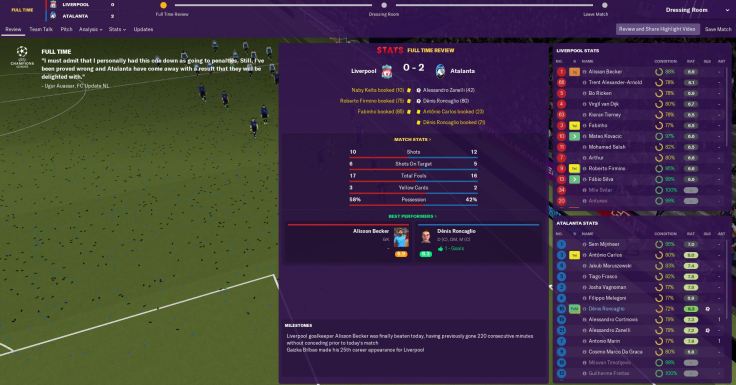 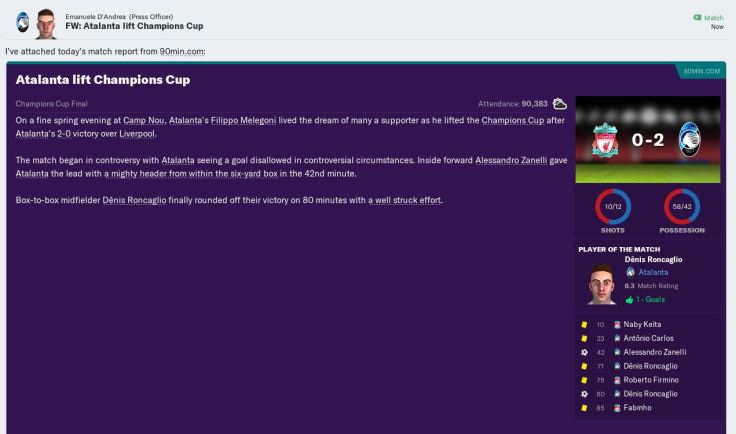 This unlikely victory saw Atalanta rise to the fifth best team in the world rankings, only behind Liverpool, Manchester United, Manchester City and AS Monaco – who’d won the Champions Cup two years before. 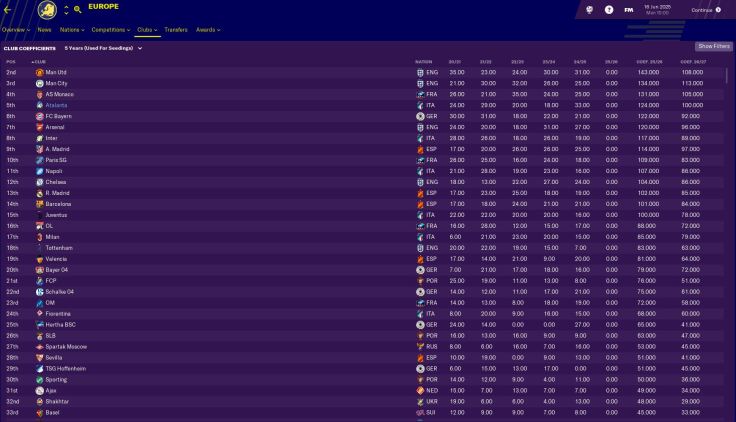 Meanwhile, our Under 20s side also won their Champions Cup for the third time in four seasons, which showed that the future really is strong at Atalanta. 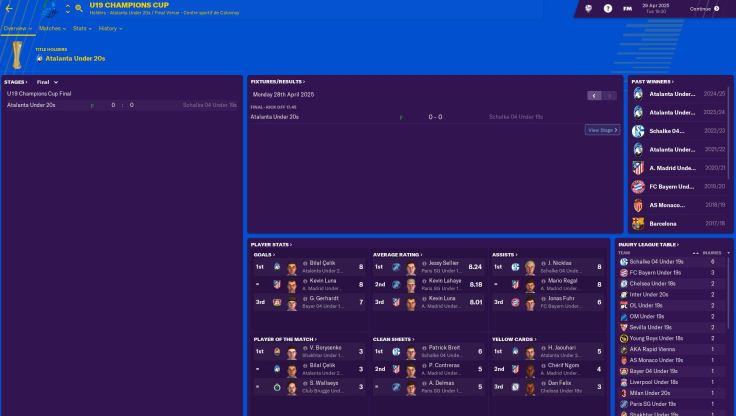 Da Graca wrapped up his third straight Serie A Top Goalscorer award, while Marin also won the Serie A Player of the Year for a third straight year. And the successful season saw me enter the English Hall of Fame, albeit well behind the great Bob Paisley.

In other news, we finished off the season by bringing a famous face into our coaching staff – as Lionel Messi retired and joined the club as an Under 18s Coach. He joined a staff that also includes Cristiano Ronaldo, who I’ve now promoted to Under 20s Assistant Manager.

It was an unbelievable season for Atalanta, winning the Champions League, Serie A and the Italian Super Cup. As a result, our players’ values soared as did interest in securing their services. 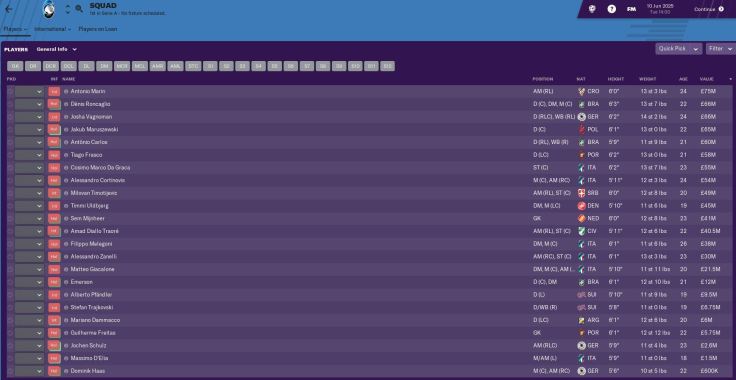