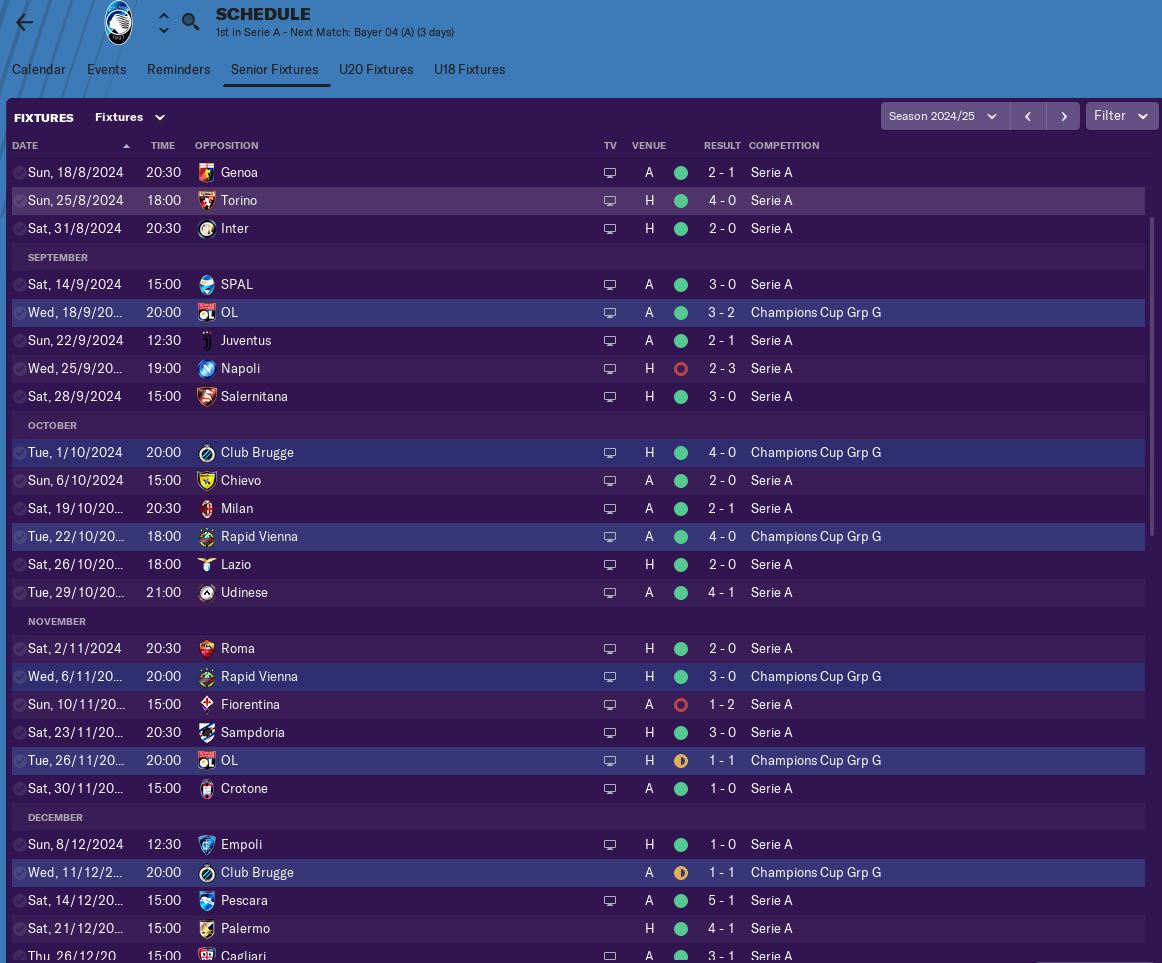 Having completed the first ever Serie A title in Atalanta history in the 2023/24 campaign, the expectations were heightened for the next campaign.

The season began with some major departures, as we brought into £141 million in sales. That included selling unsettled winger Frederic Pereira to Atletico Madrid for £26.5 million and academy product Dejan Kulusevski to Alaves for £16.25 million.

A whole host of our exciting young players had attracted major interest from Europe’s big boys, but I stood firm on bids for our near-world-class centre-back pairing Tiago Frasco and Jakub Maruszewski and winger Antonio Marin. However, we did allow backup right-back Ivo Borges to move on to Tottenham for £40 million and holding midfielder Antunes moved to Liverpool for £36.5 million.

We also added a few necessary signings to the squad, including spending £14 million on a new backup left-back Alberto Pfandler and adding another backup right-back Stefan Trajkovski.

The new season began well with four straight league victories without conceding a goal, including academy product midfielder Matteo Giacalone scoring a hat-trick in a 4-0 win over Torino then Cosimo Marco Da Graca repeating the feat in a 3-0 win against SPAL. A vital 2-1 win over Juventus, thanks to two goals by winger Jochen Schulz, saw us extend the winning run to five before slipping to a 3-2 home defeat against Napoli.

We got off to a great start in the Champions League too, winning 3-2 away to Lyon then a 4-0 win at Club Brugge was followed up by winning 4-0 at Rapid Vienna. We secured qualification with a 3-0 win at home to Rapid, then secured the group with two draws with our backup players.

We went on another superb run of league form, winning six straight matches including a 4-1 win at Udinese and a 2-0 home victory over AS Roma. A 2-1 defeat at Fiorentina was followed up by seven straight league wins to bring in the New Year.

Next time, we’ll look to continue a fine run of league form and see whether we can improve our Champions League form on recent seasons.